The first meeting on the Palestine Solidarity Committee took place at Columbia University in New York City’ on January 20, 1976. Security for the meeting was very extensive. Each participant was given a ticket with his name on it, countersigned by the person from whom he had received the ticket. When the ticket was presented at the door, its number and the name of the participant was checked against a master list. The name of the individual’s organization was also on the list. After surrendering his ticket, each participant received a body search before being permitted to enter the room.

Among the groups participating in the meeting and providing security guards for the meeting were the Prairie Fire Organizing Committee, the Communist Party U.S.A., and the Socialist Workers Party. The main speaker at the meeting was Shafik al Hout, of the Palestine Liberation Organization in Lebanon. During the question- and-answer period, some questions were answered by Basil al Aql, member of the Palestine Liberation Organization Delegation to the United Nations, and Yasser Abd al Rabdou, member of the Palestine Liberation Organization Executive Committee and head of the PLO’s Information Department. Also on the platform, but not answering questions was Hassan Abdul Kahman, Deputy Permanent Observer of PLO at the United Nations. Al Hout and al Aql spoke strongly in favor of armed struggle. Both also stressed the importance of the support they had received from the Soviet Union and Communist China.

On May 16, 1976, the Palestine Solidarity Committee was able to bring together almost 900 people to a demonstration in Brooklyn, N.Y. Approximately 500 of those were radicals from outside the area, and about 400 were local people.

— From the testimony of Dr. William R. Kintner (President, Foreign Policy Research Institute) collected in “Threats to the peaceful observance of the bicentennial: hearing before the Subcommittee to Investigate the Administration of the Internal Security Act and Other Internal Security Laws of the Committee on the Judiciary, United States Senate”, Ninety-fourth Congress, second session, June 18, 1976 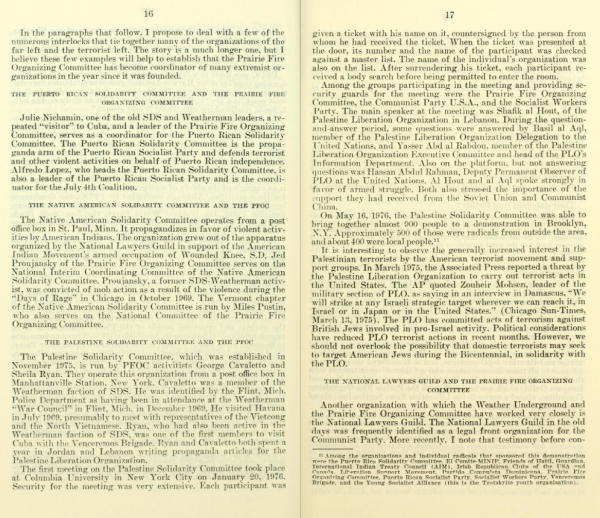 (Available in Google Books and OpenLibrary.)