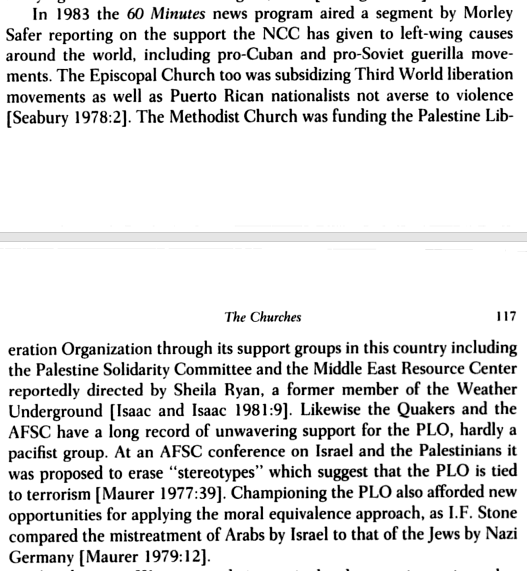 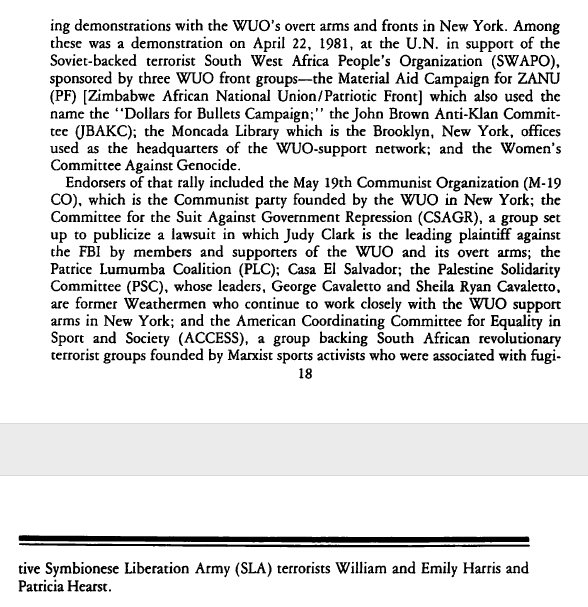 In 1976, the FBI assembled a report on the Weather Underground that included Sheila and George on the same list as Bill Ayers and Benardine Dohrn.

This is inaccurate. Sheila and George were never members of the Weathermen or the Weather Underground.

Sheila disagreed with the “small vanguardist strategy” adopted by the Weathermen, which she saw as undermining the efforts to build mass movements in the United States that could bring about real political change.

Eventually released under the Freedom of Information Act, the document is available through the FBI’s web site.

Here’s the FBI’s profile on Sheila as part of the Weather Underground network: 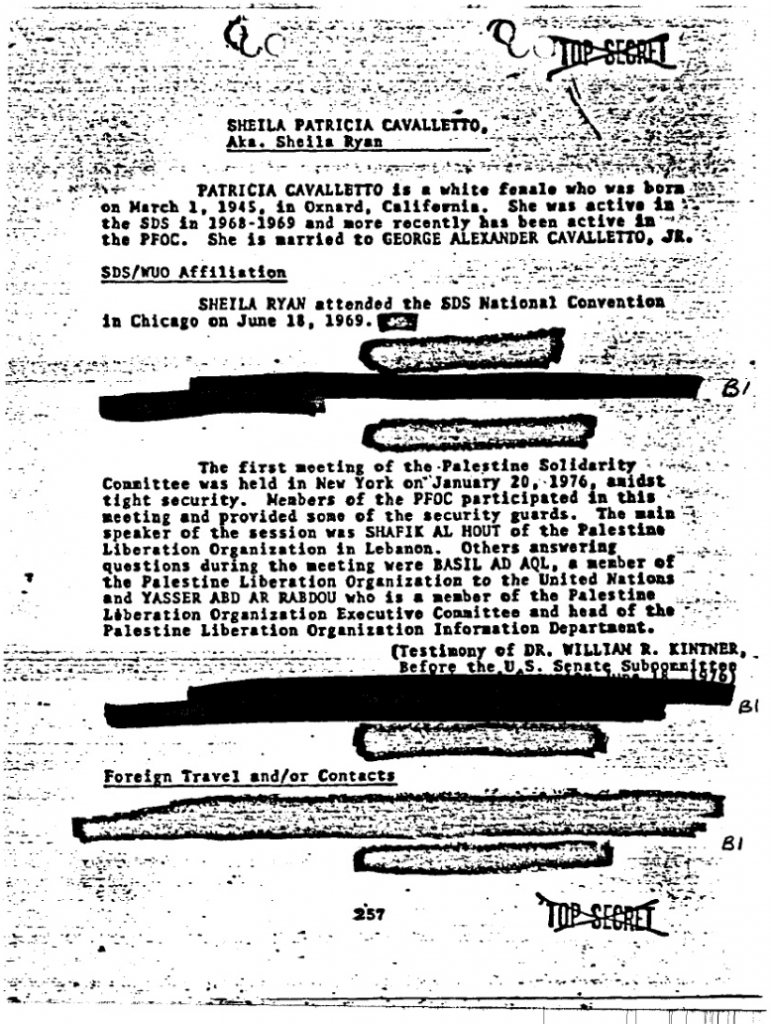 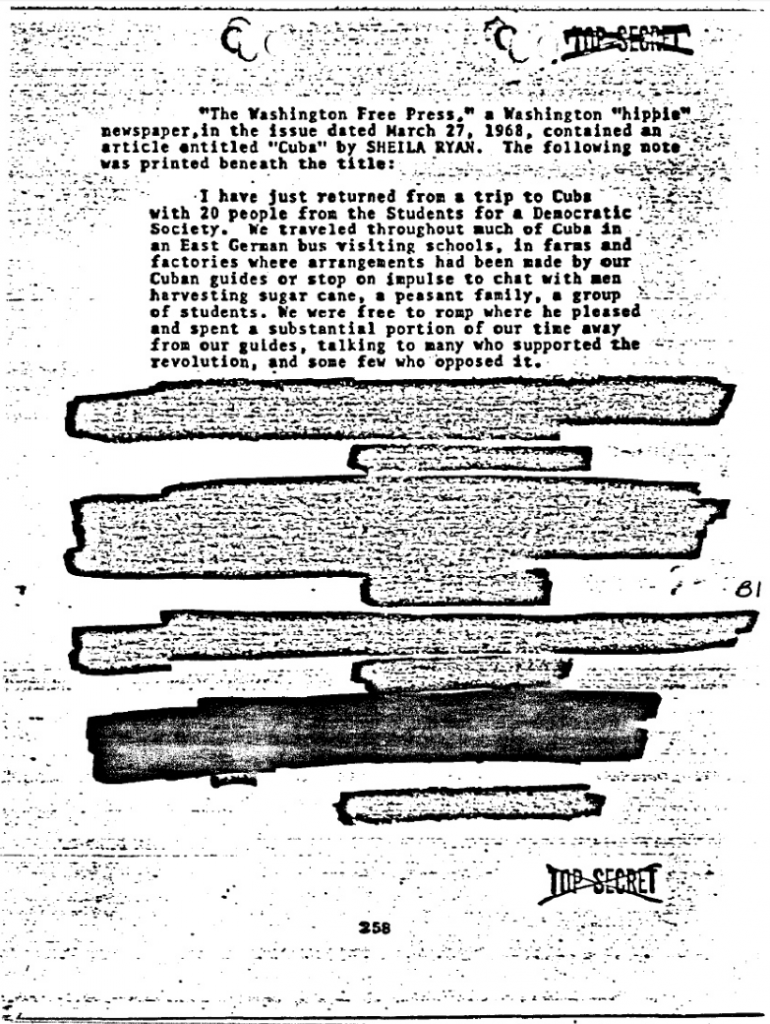 Photographer Jeff Blankfort remembers Sheila having private criticisms about the leadership of the P.L.O. that she was reluctant to share:

Re the Palestinian question, on my first trip to the Middle East in 1970 with the two founders of Liberation News Service, Sheila Ryan and George Cavelleto, we generally had a negative image of Yasser Arafat, but felt, at the time, that it was not our business to be deciding who should lead the Palestinian people, particularly when most Americans knew little about the Palestinians in the first place.

He later felt that Sheila’s Palestine Solidarity Committee was too closely aligned with the P.L.O.

When Steve Zeltzer and I founded the Labor Committee on the Middle East, in response to the failure of the Palestine Solidarity Committee to relate to that important issue, and its unwillingness to criticize the Histadrut (the Israeli Labor Federation) among a number of its failings, and became, despite our relatively small numbers, the most active group campaigning for Palestinian rights, we still maintained our distance from Arafat.

One New Left historian remembers Sheila in 1968 as a hard-core radical:

By 1968 important new elements were joining the ranks of the disillusioned. Business, much of it having assumed a partial and tentative membership in the liberal coalition, began to fear the inflation caused by the war. An antiwar group composed of Wall Street business executives, including Marriner Eccles, chair of the Federal Reserve Board under Presidents Roosevelt and Truman, took out an ad in the New York Times opposing the war on grounds it termed practical.

One antiwar activist, Sheila Ryan, attacked Eccles for owning mining operations that might conceivably benefit from the war’s end: evidently since he was not openly on the side of Hanoi and the National Liberation Front he had to be on Johnson’s. Ms. Ryan and some other members of the New Left had come to believe that only mass violence by urban guerrillas would end the evil sway of United States imperialism. Appearing to dislike Eccles and such liberals as Arthur Schlesinger more ardently than they did Johnson, they took as their hero the Argentine-Cuban revolutionary Ernesto “Ché” Guevara.

Cathy Wilkerson, one of the Weathermen who survived the March 6, 1970 explosion in Greenwich Village, had met Sheila when she first moved to Washington D.C. in 1967:

Sheila Ryan wrote about the connections between Democratic Party leaders and the Institute of International Labor Research, an organization that designed and set up “left” parties in seventeen Latin American countries, supporting them with funds from the CIA. The leaders of these parties then helped the United States to orchestrate the installation of politicians loyal to the United States, like Bosch in the Dominican Republic, without showing their hand too obviously. WFP writers also researched connections between local political people, including a few in the peace movement, and CIA-funded foundations and institutes. Through these articles, and others published in Ramparts magazine during the same period, I learned to search for the funding behind any foundation, organization, or institute and to stay suspicious of the hidden hand of the CIA, which in the name of democracy often sought to undermine local grass-roots forces.

… Peter Henig’s friend from Earlham, Marilyn McNabb… like Peter and Sheila, was drawn to the task of teasing apart the connections between the various circles of power in the country, and in so doing, showed how these circles knowingly served each other.

(At Google Books) (At Amazon)