Sheila is cited in this report by a director of Faith House in St. Louis:

A larger, unmet challenge still faces us. HIV/AIDS is now the sixth leading cause of death among young people between the ages of 15 and 24. Sheila Ryan of the Special Needs Clinic of the New York Presbyterian Hospital warns about a serious lack of services nationwide for HIV-infected teens. Adolescents do not fit into most traditional programs because of their particular learning problems and emotional and behavioral issues. It is past time for our community to address this population.

An article in Redbook magazine in 1999 quotes Sheila about the patients at the Special Needs Clinic:

Ryan, herself a mother of five, is a rock-solid presence. … “These are people whom the system considers expendable,” says Ryan. “They’ve been beaten down and traumatized, their families have been torn apart. And still they won’t give up. Their will to survive–not just in a physical sense but as human beings–is inspiring.”

Read on for a good overview of the clinic and the unique way it helps their patients:

THEIR MOTHERS HAVE BEEN CLAIMED BY AIDS. THE SYSTEM HAS FORGOTTEN THEM. FINALLY, THERE’S A RAY OF HOPE FOR THE EPIDEMIC’S HIDDEN VICTIMS.

END_OF_DOCUMENT_TOKEN_TO_BE_REPLACED

One of Sheila’s book titles prompted a airport-security profiling incident in 1986:

Rema Simon, a 23-year-old citizen of Massachusetts, is of French and Lebanese descent. She works in the Massachusetts State Legislature’s Social Law Library. But on the evening of May 1, she was in Ft. Lauderdale, about to end her vacation and take a Delta Airlines flight back to Boston.

Having passed the usual security check, Simon was on board, waiting for the plane to take off and reading a book, “Palestine Is, but Not in Jordan.” Looking up, she saw a man “carrying a walkie-talkie. He said, ‘Miss, could you please come with me? I have to talk to you.’ ” She followed him off the plane. “We stood outside the door of the aircraft,” she said. “Several flight attendants and airline or airport personnel stood around us.”

END_OF_DOCUMENT_TOKEN_TO_BE_REPLACED

In 1981, the New York Times covered a PSC protest held adjacent to the annual New York City parade for the foundation of the state of Israel:

In a message from Israel, Prime Minister Menachem Begin appealed to Israel’s supporters not to allow any retaliatory actions against his country for destroying the Iraqi reactor. …

The crowd, which included marchers from 100 groups and thousands who lined the avenue to cheer them, applauded the Prime Minister’s statement.

The appeal was mocked at a counterdemonstration sponsored by the Palestinian Solidarity Committee attended by some 100 people nearby in Central Park . ”The Salute to Israel parade is a salute to racism, colonialism and repression,” said one banner held aloft there. ”Stop U.S. Aid to Israel,” said another. …

The Palestinian rally in Central Park off Fifth Avenue and 97th Street was called ”A Teach-In on Avoiding War in the Middle East.” Sheila Ryan, an organizer of the teach-in, said that her group’s aim was to ”stop the continuing flow of weapons to the Middle East.” She said this included Israel and Arab nations.

Sheila led these protests every summer for several years:

Celebration of the Israeli-Egyptian peace treaty was an underlying theme of the 15th annual Salute to Israel parade Sunday in which some 75,000 persons sang and danced up Fifth Avenue.

Mayor Edward I. Koch, City Council President Carol Bellamy and other city officials led the costumed paraders up the avenue, marching to the theme song from “Exodus” and waving to observers who lined the street despite intermittent rain.

But several blocks downtown, the peace treaty signed on March 26 was denounced by the Palestine Solidarity Committee which staged its own rally and marched uptown on other avenues in protest.

END_OF_DOCUMENT_TOKEN_TO_BE_REPLACED

In November, 1978, the PLO Information Bulletin reported on a PSC-led protest rally at the United Nations. Sheila is quoted as the rally’s organizer, and is shown in the second picture, holding the “No to the Camp David Pact; Yes to Palestinian National Rights.” banner.

Demonstrators against the Camp David accords delivered messages to the U.S., Israeli and Egyptian missions to the United Nations during a protest march in New York City on September 23. The messages criticized the pact for ignoring the central issue in the Mideast conflict, the Palestinian national question, and declared that this question can only be solved by realization of Palestinian national rights.

The demonstrators protested in particular the role of U.S. President Jimmy Carter in the negotiations; the marchers chanted “Carter, your Camp David Pact won’t bring peace and that’s a fact.” In banners, placards and speeches they demanded that the U.S. government stop its aid to Israel.

The march began with a rally in front of the United Nations, where Hassan Abdul Rahman of the Palestine Liberation Organization’s U.N. office told some 200 demonstrators that only the PLO represents the Palestinian people, and that peace is not possible until the people have their national rights.

The demonstrators bore Palestinian flags and colorful banners, including one proclaiming, “No to the Camp David Pact; Yes to Palestinian National Rights.” As they marched through crowds of Saturday shoppers the protestors chanted, “Carter, Carter, we’re no fools: Sadat and Begin are your tools.”

Sheila Ryan, speaking for the Palestine Solidarity Committee, which organized the event in coordination with Arab community groups, declared that if Carter were genuinely interested in peace in the Middle East, he would stop U.S. aid to Israel and arms shipments to the region. “Carter is a false prophet of peace,” Ryan said. “This is not a peace but a pact for a new kind of war against the Palestinian people.”

END_OF_DOCUMENT_TOKEN_TO_BE_REPLACED

Here’s how the New York Times covered the LNS split in August 1968:

And here was the follow-up piece the next day:

This article in the Washington Post in December 1967 is based on an interview while Sheila was in jail. 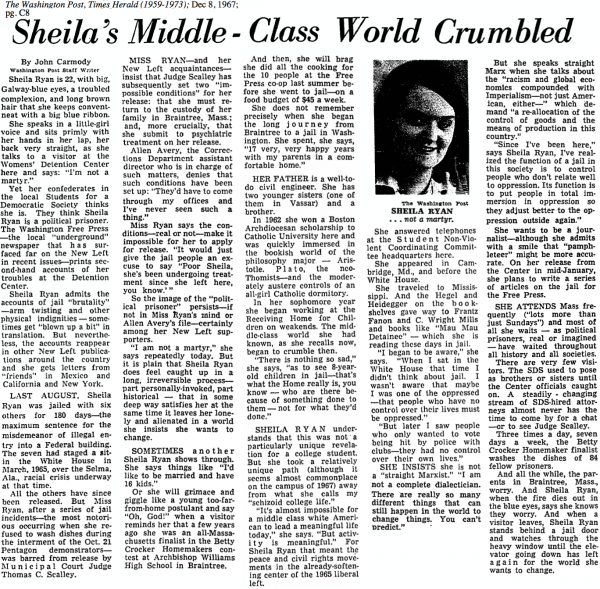 The jail-house photo is imperfect, but recognizably Sheila: 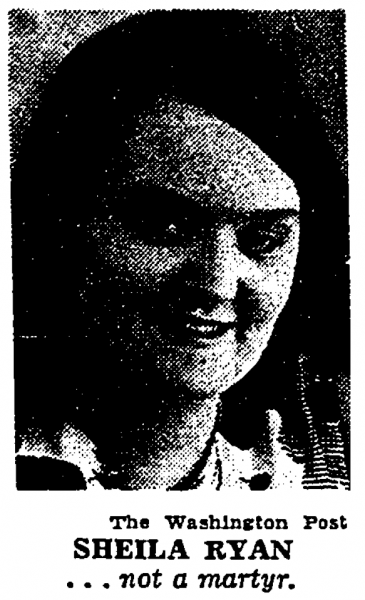 This article was also syndicated to The Milwaukee Journal a week later.

We have not been able to locate an online copy of this article, which has been cited in a couple of recent New Left History books, so all we have to go on is the title:

The New York Times reported on Sheila’s sentencing on June 23, 1965:

They were released on $300 bond while they filed an appeal:

The sit-in protestors were tried and convicted three months later: 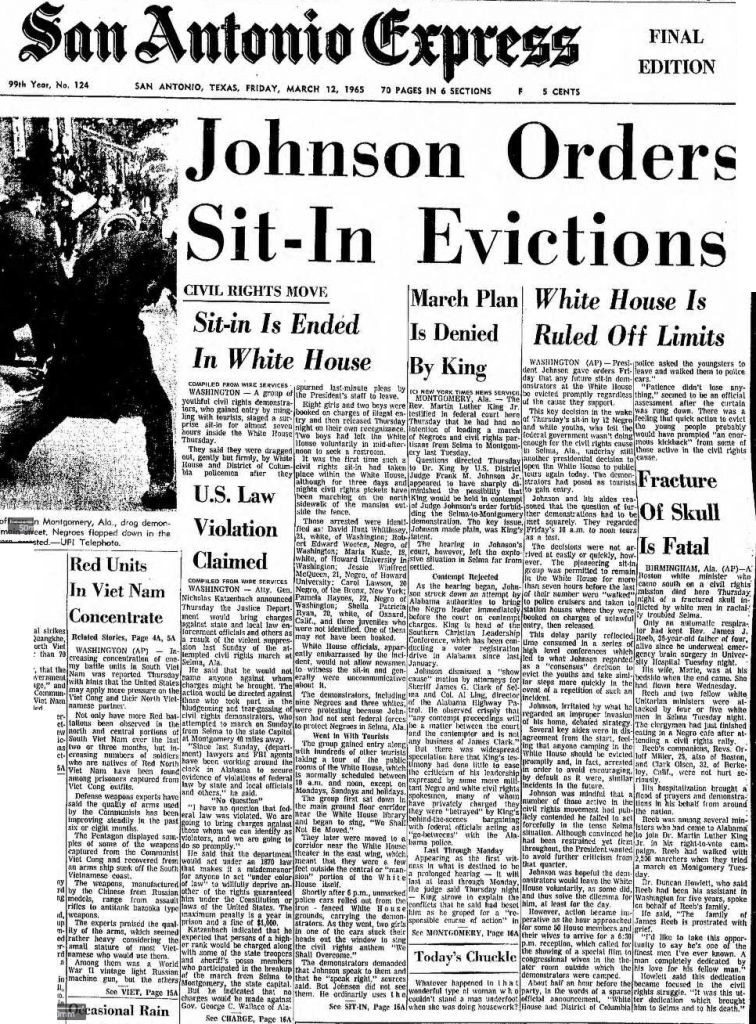 The Boston Globe reported on Sheila’s protest and arrest on March 12, 1965.

This photo from the Boston Globe on March 12, 1965 shows Sheila and two other women talking with their lawyer following their arrest at the White House.

The protest was reported in the Long Beach Press Telegram

The sit-in was front-page news in Charleston, West Virginia, which ran the same AP story: 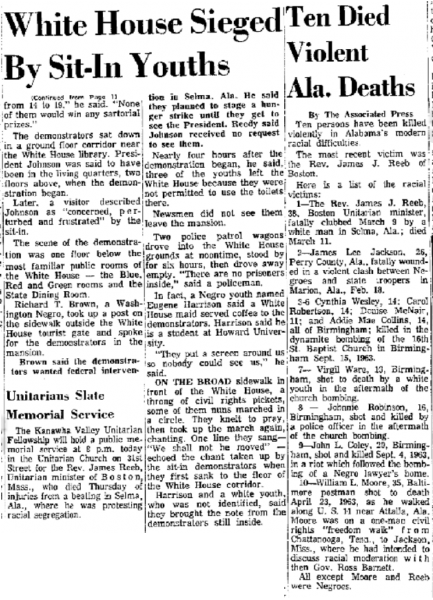 The sit-in was front-page news in the Pittsburgh Post-Gazette on March 12, 1965: 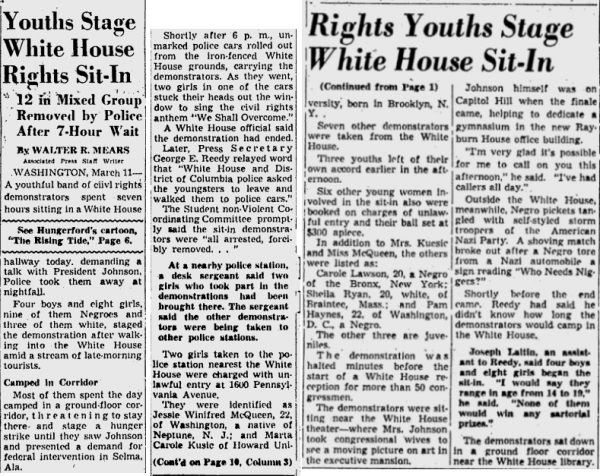 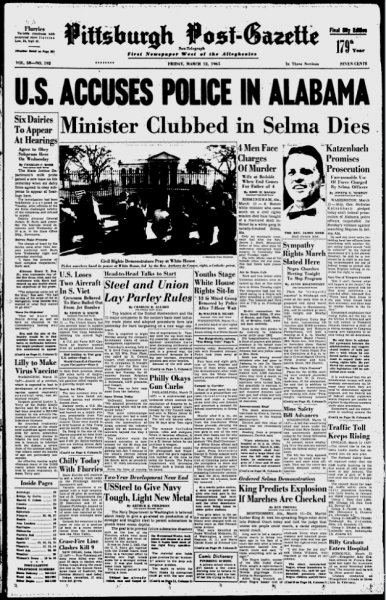 From the front page of the Mt Vernon Register News, Thursday, March 11, 1965: 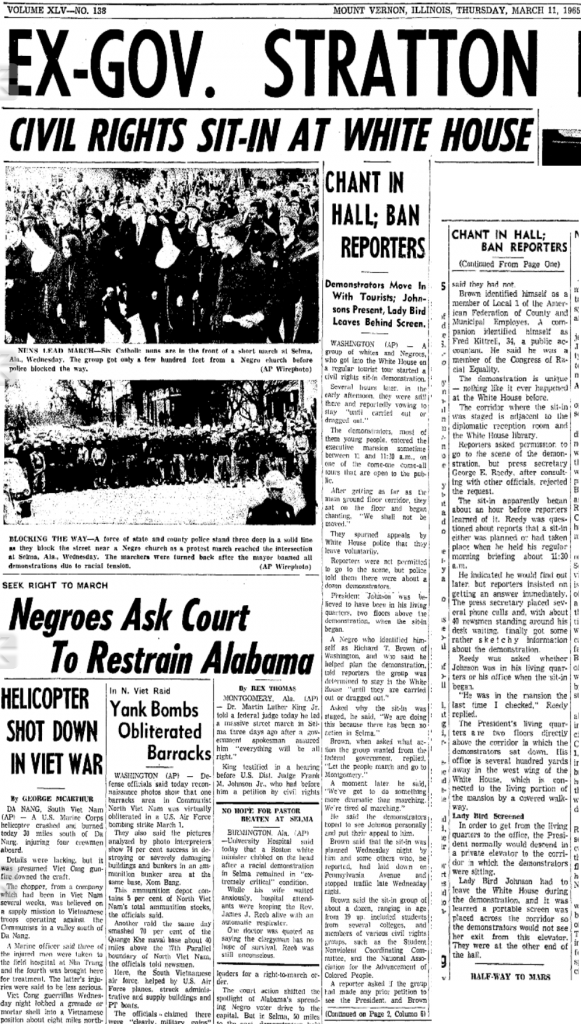 The protest was reported on the front page of the New York Times: “Sitdown Inside White House Protests Selma; Police Eject Youths — Pickets Continue March Outside” 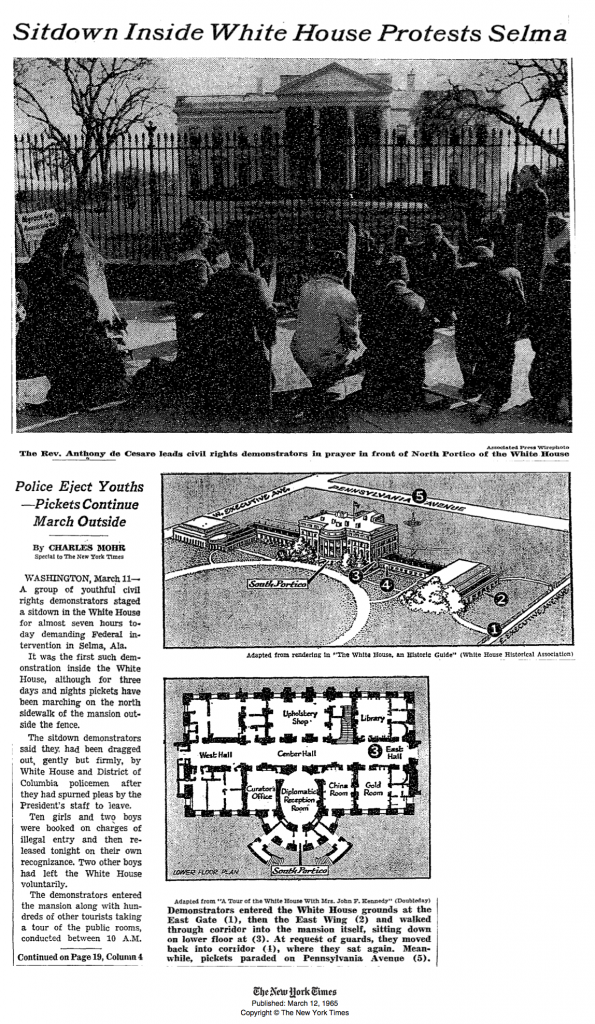