Here’s how LNS covered the settlement of the charges resulting from the LNS split that summer: 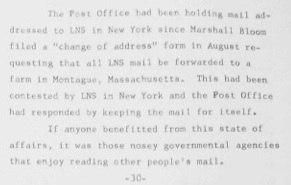 One New Left historian remembers Sheila in 1968 as a hard-core radical:

By 1968 important new elements were joining the ranks of the disillusioned. Business, much of it having assumed a partial and tentative membership in the liberal coalition, began to fear the inflation caused by the war. An antiwar group composed of Wall Street business executives, including Marriner Eccles, chair of the Federal Reserve Board under Presidents Roosevelt and Truman, took out an ad in the New York Times opposing the war on grounds it termed practical.

One antiwar activist, Sheila Ryan, attacked Eccles for owning mining operations that might conceivably benefit from the war’s end: evidently since he was not openly on the side of Hanoi and the National Liberation Front he had to be on Johnson’s. Ms. Ryan and some other members of the New Left had come to believe that only mass violence by urban guerrillas would end the evil sway of United States imperialism. Appearing to dislike Eccles and such liberals as Arthur Schlesinger more ardently than they did Johnson, they took as their hero the Argentine-Cuban revolutionary Ernesto “Ché” Guevara.