Sheila wrote this article about the Palestinians from Jordan in late 1969: 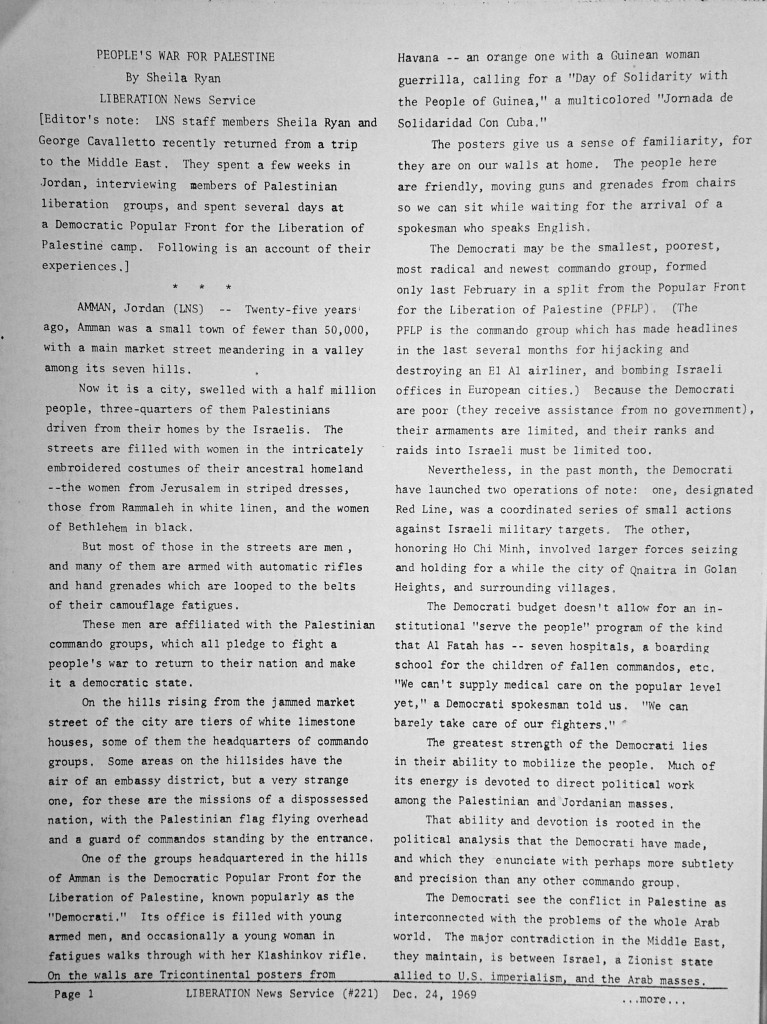 END_OF_DOCUMENT_TOKEN_TO_BE_REPLACED

In the summer of 1969, Sheila and George were married near Sheila’s parents’ house on Cape Cod. 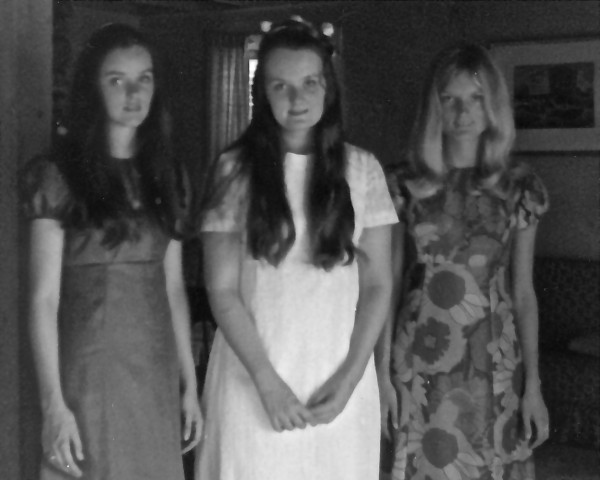 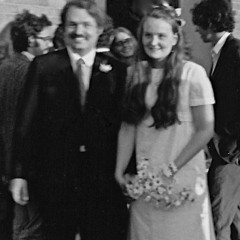 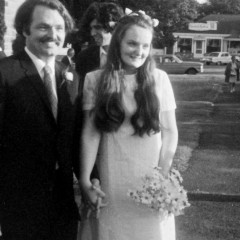 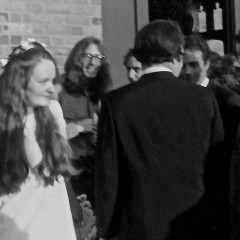 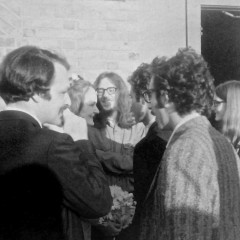 Sheila advocated for women to take an equal role in the underground press:

In July 1969… Ann Arbor, Michigan… a four-day UPS [Underground Press Syndicate] conference that was hosted by a commune called Trans-Love Energies Unlimited. … the group managed to discuss many of the main issues that were roiling the underground press in this period. One focal point was sexism; a group of women’s liberationists complained that they were treated shabbily by their colleagues, and despite heavy opposition from the White Panthers, LNS’s Sheila Ryan was able to spearhead the passage of a three-point resolution proclaiming: “(1) sexism must be eliminated from the underground paper’s contents and ads, (2) undergrounds should publish articles on women’s oppression, (and) (3) women should have full roles in underground papers’ staffs.”

A slightly longer version of this resolution is given in the Wikipedia entry on UPS which sounds like Sheila’s composition;

1. That male supremacy and chauvinism be eliminated from the contents of the underground papers. For example, papers should stop accepting commercial advertising that uses women’s bodies to sell records and other products, and advertisements for sex, since the use of sex as a commodity specially oppresses women in this country. Also, women’s bodies should not be exploited in the papers for the purpose of increasing circulation.

2. That papers make a particular effort to publish material on women’s oppression and liberation with the entire contents of the paper.

3. That women have a full role in all the functions of the staffs of underground papers.

LNS member Andy Marx accompanied Sheila to the UPS meeting and tells the story this way:

We went to this meeting … it was this really weird thing, it was out on this sort of farm outside of Ann Arbor, with — one of the organizing groups was the White Panther Party, who fancied themselves to be the equivalent of the Black Panthers, so there’s this sort of wasted looking guy named Fuzzy, that was his nickname, with a 22 and something — sitting at the end of the driveway, as if he was going to … fight them off [if the police came].

The papers, a lof them that were represented there were all into this — a lot of them survived on advertising that was full of sort of misogynistic images of women, and Sheila, just in this non-confrontational but absolutely persistant — I mean, she just wouldn’t let go of it — carried on this long debate / discussion, and it ended up they adopted a position saying that the papers should, both in their content page coverage and in their advertising pages, they should repudiate sterotype and demeaning images of women.

… So she was dealing with … these stoned guys who were sort of proclaiming about being too hard-core political, and being uptight about this — “so we have pictures of naked chicks, you know, what’s the problem, you know, we all want to be free.” … And she managed — it was impressive — to communicate across the board.

LNS was the target of government attention and a sustained campaign of dirty tricks.

As summarized in an article on “The Press” published by “Forgotten History”:

The Liberation News Service was an alternative wire service that spoke out against the war in Vietnam. It was very critical of U.S. involvement and provided a service to the mainstream press by providing sources of information for them. The reality was that the mainstream press was so out of touch, that they needed the content and contacts that services such as the Liberation News provided. During the war, the Liberation News became the target of the CIA, the FBI and Military Intelligence. The FBI went so far as to break into their offices, destroy their equipment and set fire to the building. The CIA set up informants to spy on the service, which is forbidden under the CIA’s charter, while the FBI moved to discredit them.

Further details were provided in an article for the Columbia Journalism Review:

The government’s offensive against the underground press primarily involved three agencies – the CIA, the FBI, and the Army. In many cases, their activities stemmed from what they could claim were legitimate concerns. The CIA’s Operation CHAOS, for example, was set up to look into the foreign connections of domestic dissidents; however, it soon exceeded its mandate and became part of the broad attack on the left and on publications that were regarded as creating a climate disruptive of the war effort. At its height, the government’s offensive may have affected more than 150 of the roughly 500 underground publications that became the nerve centers of the antiwar and countercultural movements.

A telling example of this offensive was the harassment of Liberation News Service, which, when opposition to the Vietnam War was building, played a key role in keeping the disparate parts of the antiwar movement informed. By 1968, the FBI had assigned three informants to penetrate the news service, while nine other informants regularly reported on it from the outside. Their reports were forwarded to the U.S. Army’s Counterintelligence Branch. where an analyst kept tabs on LNS founders Ray Mungo and Marshall Bloom, and to the Secret Service, the Internal Revenue Service, the Navy, the Air Force, and the CIA. The FBI also attempted to discredit and break up the news service through various counterintelligence activities, such as trying to make LNS appear to be an FBI front, to create friction among staff members, and to burn down the LNS office in Washington while the staff slept upstairs. Before long, the CIA, too, joined the offensive; one of its recruits began filing reports on the movements of LNS staff members while reporting for the underground press to establish his cover as an underground journalist.

During the 1971 May Day antiwar demonstration in Washington, Ferrera took photographs and reported on the event for College Press Service, an antiwar syndication service; he may well have been the agent mentioned in the Rockefeller Commission’s hearings on the CIA as having covered the demonstration for the agency. He also appears to have been the source of two reports to the CIA regarding staff members of Liberation News Service. In late April, when Ferrera was still working in the Quicksilver office, an LNS editor stopped in to ask if LNS staff members who planned to come down from New York for May Day could lodge there. A CHAOS informant’s report, dated April 25 and released to LNS editor Andrew Marx under the FOIA, refers to this visit. A second report lists all LNS staff members who attended the May Day demonstration.

In some cities, when direct attacks proved unsuccessful, the government set up its own phony news service which, so long as it was unexposed, provided a means of penetrating the left; once exposed, it cast suspicion on legitimate underground reporters and helped to create a feeling of paranoia. … Meanwhile, on the East Coast, the FBI operated New York Press Service under the direction of Louis Salzberg. NYPS offered its services to left-wing publications at attractive rates, soliciting business with a letter that read, in part: “The next time your organization schedules a demonstration, march, picket or office party, let us know in advance. We’ll cover it like a blanket and deliver a cost free sample of our work to your office.” NYPS’s cover was blown when Salzberg surfaced as a government witness in the Chicago Seven trial, during which it was disclosed that he had been an FBI informant.

The New York field office shrewdly turned this setback into a means of casting suspicion on Liberation News Service. The office prepared an anonymous letter, copies of which were sent to newspapers and antiwar groups, accusing LNS of being an FBI front. “Lns [sic] is in an ideal position to infiltrate the movement at every level,” the letter stated. “It has carefully concealed its books from all but a select few. Former employees have openly questioned its sources of operating funds, I shall write to you further on Lns for I (and several others) are taking steps to expose this fraud for what it really is – a government financed front.”

This article by Sheila was printed in the April 10, 1969 edition of the SDS New Left Notes:

NEW YORK, NEW YORK (LNS) — “SMASH PANTHER BOMB PLOT!* “COPS: CUBA HELPS PANTHERS PROWL,” and “SEEK PANTHER LINK TO STOLEN YOUTH FUNDS” displaced the headlines of the previous week describing a city in disintegration— hospitals being closed because adequate funds were denied by the city and state governments, welfare appropriations cut so that clients would be hard-put to survive, the City College president resigning because the legislators had cut the budget below minimum, high school students in a state of rebellion.